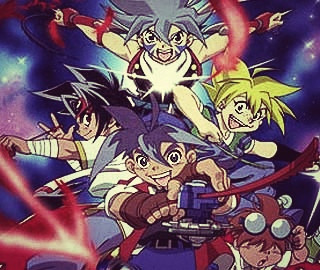 I didn’t realize that my first fansite on the anime Bakuten Shoot Beyblade (or Beyblade) went online in October 2002, ten ears ago.

I’m planning a little something special to mark this occasion. Watch this space!

BTW it was called The Blade Raider.

Hi! My first time posting to this community, and I'm still fairly new to livejournal... But anyways, just thought I would share a fanart picture I drew here the other day, of Kai and Tyson together~

I hope you like it, and I'd love some feedback! :)

Disclaimer: Don't own beyblade or any of its characters. I only own the art work.

please share the beyblading spirit once again, with love!

Title: Centrepiece
Chapter: Introduction
Author: Jedi Princess Clarrisani
Fandom: Beyblade
Rating: M15+ Seriously people, this fic contains non-con/rape, violence, thoughts of suicide, language
Pairings: Ray/Tala/Kai, Mariah/Kevin, Ray/Bryan, Tala/Bryan, and a surprise other
Summary: Ray finds himself trapped in a relationship he can’t get out of.
Disclaimer: Contrary to what some people believe, I do not own Beyblade

Title: Christmas Secret
Series: BeyBlade
Rating: K
Genre: Romance/Fluff; Warning: Na;  Ship/Character/PoV: KaiHiromi, Hiromi's view
Summary: Hiromi ponders Christmas and fails to find a gift for Kai yet ends up being exactly what he wanted
Words: 2000ish
Disclaimer: Sadly, I only own in my head ;.;

When she had first met Kai, Hiromi thought he was a bit (well, a lot really) of a jerk. Her opinion of him didn't change the second, third, fourth, fifth, or even twentieth time they met. Still, he was a great captain and beyblader, even though, at the time, she had no idea what bit beasts really were and she thought a sport based on spinning tops of all things was ridiculous. http://ladyshewolf.livejournal.com/5769.html

Various fanfiction of mine I thought I'd share :3
Enjoy~!

Title: Propose
Series: BeyBlade
Rating: K
Genre: Drabble; Warning: Yaoi;  Ship/Character/PoV: TalaKai, Kai
Summary: Kai reflects on his relationship as a simple note from Tala changes the dynamics of it.
Disclaimer: Sadly, I only own in my head ;.;

They'd known each other the majority of their lives. Kai had entered the Abbey when Tala was already an established member and had been instantly attracted. The red hair and loud, brash and 'devil may care' attitude was a breath of life in the dark and cold corridors that surrounded him. http://ladyshewolf.livejournal.com/3952.html

At the start, he'd been annoyed. To be fair, it was entirely Yuuya's fault. He was such a fanboy, admiring Kai for everything he did or didn't do. That type of behaviour irked him. Then the brunette had gotten himself involved in his problems. He didn't pull out when Kai told him too... He was stubborn and his pride hurt when his idol didn't acknowledge him... http://ladyshewolf.livejournal.com/4099.html

I totally haven't thought about Beyblade in years. I didn't think there was an LJ group for it <3 Anyways ~

Koan City is a multifandom roleplay on livejournal. We're seeking new members and really dynamic characters which totally lead me on a Beyblade LJ group hunt. We'd love to get some of you guys in there (and we'd welcome you if you chose not to play a Beyblade character too, of course).

Basically in Koan City, the characters find themselves in a mysterious city run by the Overseers - a group of powerful, possibly magical people who do experiments on them in the name of science. The experiments lead to things like your characters temporarily getting super powers, transported to lovely beaches, or in the midsts of zombie apocalypses. There's a whole range of exciting things for your characters to experience. We'd love to see some of you guys join us in the fun.

Title: The Fearless Four!
Character(s): Tyson, Kai, Rei, Max, and others (Hilary, Tala, Lee, etc.)
Pairing(s): None
Rating: T
Summary: POST CANON - The most chaotic idea Tyson's come up with yet: "Hey, since we're all attending the same college, wouldn't it be fun if we crashed together? It'd be just like old days!" Watch as four college boys turn an entire city upside down.
Link: « Great, » Kai said, « You can start with the laundry. Then you can clean the bathroom upstairs. » Hilary sputtered: « E-Excuse me?! Do I look like your maid, Kai? Do I? » Kai's voice floated back: « Not really, but you can be one if you'd like. »
Collapse